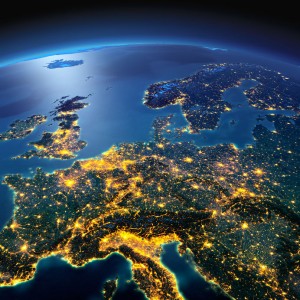 Their take is this: ‘Powers of Ten illustrates the universe as an arena of both continuity and change, of everyday picnics and cosmic mystery… We hear about scale every day, whether it be supertankers, stars burning thousands of lightyears away, the study of microscopic viruses, or global warming. Understanding scale has the power to make us better scholars and better citizens. Starting at a lakeside picnic in Chicago – with a close-up shot of a man sleeping on a picnic blanket, viewed from one metre away – the film transports us to the outer edges of the universe. Every ten seconds we view the starting point from ten times farther out until our own galaxy is visible as nothing more than a speck of light among many others. Returning to Earth with breath-taking speed through orders of magnitude, we move inward—into the hand of the sleeping picnicker—with ten times more magnification every ten seconds. The journey ends inside a proton of a carbon atom, which is within a DNA molecule inside of a white blood cell.’

And if you look at the book of the film (on the table in the centre) you can see the starting point – the sleeping man – then on the back just a few selected frames from the film, from the furthest reaches of the universe, zooming in through many intermediate stages to the Milky Way, the solar system, then Earth comes into view, a particular city, then a park, and a picnic blanket… then it keeps going: the texture of the man’s skin… to a cell, a strand of DNA, a carbon atom, a proton. The directors said ‘The traveller’s eye moves along a straight line, never leaving it… One end of that line lies in the darkness of outermost space, while the other is on the earth, in Chicago, within a carbon atom, beneath the skin of a man asleep in the sun… The nucleus is at the very centre of each picture, whether it can be seen or not… [and] the elusive inner target is approached as closely as our present knowledge permits. Others who come later will travel farther.’

So – why did I want to bring this film to church today, as we set out on our month of curiosity and wonder, our ministry theme for July? Well, firstly, because it seems to me a wonderful distillation of the way in which human curiosity has led us to investigate the realms of outer and inner space, and driven the technological developments – deep-space telescopes and large hadron colliders – which mean that just forty-odd years on from the release of this ground-breaking little film, it could conceivably be extended in both directions, zooming further out and further in. As a species, we want to know what’s out there, and what’s in here, and we devote an amazing amount of human resources and ingenuity into that ongoing quest.

But secondly – because this is a church, after all – I wanted us to take a moment to draw attention to the spiritual lessons we might learn from this way of looking at everyday things; from the practice of looking at the world around us – both in microscopic detail, and from a great height, at the same time – and somehow integrating the way the world looks at all these different scales in order to arrive at a more holistic understanding. This is what I like to call ‘taking a God’s Eye View’. If such metaphors and God-language don’t work so well for you then you might like to think of it as ‘integrated awareness’. This way of looking at things may give us a deeper sense of our place in the scheme of things, one which emphasises our inter-connectedness, our inter-dependence, our inter-being, and the underlying oneness of All-That-Is. The words on the front of your order of service, from meditation teachers C. Alexander and Annellen Simpkins, hint at the same sort of idea using different language. In a Zen Buddhist context they speak of an ‘Enlightened Vantage Point’:

‘When we experience ourselves as one small part of nature, we feel reverence. Zen teaches that we should feel reverence for all beings no matter how insignificant they might seem. From the enlightened vantage point, we should appreciate everything equally, from the most basic and small to the most complex and vast. Each has the whole reflected within.’

Mary Oliver’s well-loved poem – ‘The Summer Day’, which Jenn read for us earlier – moves seamlessly from the very large mysteries of life to the very small grasshopper (and back again, in a few short lines). But as Mark Piper noted, in relation to that poem, we often forget about the grasshopper and skip to the famous bit at the end. Perhaps, just for today, we can rewind, skip back again, and ponder the lines: ‘I don’t know exactly what a prayer is. I do know how to pay attention’.

Part of cultivating a ‘God’s Eye View’, as I like to think of it, is attending more deeply to what is extraordinary and sacred around us and within. Taking time to notice things and be amazed. And there is no end of stuff out there (and in here) to give this sort of deep attention and appreciation to: from the scale of the galaxy, to the planet, to the picnic blanket (or the grasshopper), to the cell, to the atom and beyond. ‘Each has the whole reflected within.’ Just being aware that a ‘God’s Eye View’ exists – that there are an infinite number of locations and scales from which to view reality (and that no one of them need be especially privileged) – well, that’s a spiritual insight in itself, and one which might lead to greater humility and compassion.

In the piece by Tess Baumberger, which Veronica read for us, the theology is made more explicit. God is expressed in every element in the unfolding universe, at every scale, throughout eternity. And, as she says, we too – each one of us here now, and every creature that’s ever lived – are ‘brief instants, intersections, nanoseconds, flashing gold-hoped moments in the eons of God.’ In this view, wherever we look, we see God… and at the same time it is God doing the looking too. God within, beholding God without, in a existence that is thoroughly drenched in ‘Drops of God’. This is the only way I’ve ever been able to make sense of the idea that God is omnipresent (everywhere at once) – omniscient (all knowing) – and eternal (existing beyond time). An understanding of God as embodied in All-That-Is suggests – to me, at least – something like an emergent consciousness that looks out from every point in the universe at once, unfolding with it, experiencing each strand of the unfolding story of existence, of ‘be-ing’, at every scale. That’s the ‘God’s Eye View’ in its largest sense. Or the ‘Enlightened Vantage Point’ if you prefer.

Now, us mere mortals, I don’t think this is really something we can aspire to fully achieving! But in the days and weeks ahead, perhaps we might remember to pay closer attention – to shift our focus, and look at things from different scales, from time to time – and to regard the universe, from the furthest reaches to the tiniest speck, with a sense of curiosity and wonder. To use our perception, and our imagination, to see the world a little bit more like God might see it. And in so doing, to live and love more fully, more deeply, more holistically, more present and awake to the beauty and mystery of it all.

May it be so, for the greater good of all. Amen.