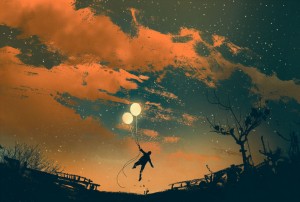 Murray’s larger point is that in wholeheartedly committing ourselves to a particular endeavour (however ambitious or outlandish it might be) – by showing our serious intent, and putting in the time, and effort, and sacrifice – we then put ourselves in the way of further opportunities and offers of help, stepping stones towards our dream which we (most likely) would not have encountered if we had only been dreaming idly on the sofa about it. ‘Whatever you can do, or dream you can, begin it! Boldness has genius, magic, and power in it. Begin it now!’

A rallying cry. But we know, don’t we, that it’s not as easy as all that. On any given day, many of us (perhaps most of us) might feel that we haven’t really got the oomph to dream boldly; indeed many of us are only just hanging on in there, coping with whatever life happens to have thrown at us, dedicating much of our energy, resources, and brain-space to just getting by, surviving.

I suppose it depends a bit what we mean by ‘dreaming’. When I hear that stirring quote from Murray – a mountaineer, after all – I think of a striving kind of dreaming; dreaming as ambition for personal achievement. The sort of dreaming that gets you up mountains, or across the finishing line of marathons, it might spur you on to write your best-selling novel, or make it big in Hollywood, or build your business empire – with the right combination of genes, dedication, sacrifice, support, and luck. Perhaps there’s a broader sense of dreaming that we could focus on this morning though. The piece by Rabbi Harold Kushner, which Brian read for us earlier, ends with the line: ‘To dream is to imagine a world and a life better than the one we know now.’

Dreams are often born of frustration with reality – with the way the world (in general) or our own life (in particular) is right now – we dream of a future that’s different, better, than today. And the more difficult our current existence, the more bold our imagined alternatives might be.

Of course, being able to dream boldly – to imagine a utopian vision for our world, or a happy-ever-after scenario for ourselves – doesn’t necessarily mean we’re going to get our way. But it might well be an important first step towards changing things for the better. Having a vision of how things might be otherwise – that may just galvanise us into action. Imagining a better world, a better life, can inspire us to aim for goals we once thought beyond us. Even if we don’t end up achieving all that we’d personally hoped for, even if we fall short of our very boldest dreams, it is quite likely that we’ll enrich our own life experience by trying, and perhaps even give the world a tiny nudge in a positive direction as we go about doing so.

There are risks to being a dreamer, of course. There’s the risk of being put down, discouraged, or dismissed by nay-sayers; by those who don’t share your vision, or who are invested in the status quo, or who are just trying to protect you. I guess that’s what was happening with Barbara Merritt and her son Richard, the founder of TheRightBean.com, in our first reading this morning. She couldn’t see it. He’d never achieved anything like that before. Nor had she, nor his dad, nor anyone they knew. To her mind his dream was destined to be a flop and she was trying to save him from it. To see his dream through to fruition he had to ignore his mum and doggedly carry on. That isn’t always easy. Discouragement – even when it’s kindly meant – can squash dreams. And it isn’t always kindly meant. Boldness – a willingness to stand up, stand your ground, be courageous, and face down nay-sayers in pursuit of your dreams – boldness seems to be key.

Another risk involved in dreaming boldly, though, is the possibility of going too far the other way. Of becoming detached from reality. Of losing ourselves in a fantasy world of ‘what-ifs’ and delusions about an imagined future… without actually taking any practical steps towards bringing about the changes we dream of.

Perhaps the most likely risk involved in being a dreamer is the risk of disappointment. Indeed the Harold Kushner reading came from a book entitled ‘Overcoming Life’s Disappointments’. In the piece we just heard, he reflects on how we humans respond to the disappointing – but unavoidable – experience of having cherished dreams that ultimately don’t come true. And he notes that, for some of us, this leads us to close down, self-limiting our imagination, narrowing our horizons, no longer daring to dream boldly for fear of being hurt again. But, later in the book, Kushner says (in words that are on the front of your order of service): ‘Broken dreams, broken hearts, hopes unrealized should not be seen as emblems of shame, badges of failure. If anything, they are tokens of courage. We were brave enough to dream, brave enough to long for so much, and when we did not get it, we were brave enough to carry the fragments of those dashed hopes with us into the future, telling us who we used to be as a prelude to discovering who we might become.’

These dreams, longings, hopes and desires may point to our truest self, our deepest purpose, and they may give us hints – despite the setbacks we face along the way – on how to live. Kushner’s piece concludes ‘I would wish for more people who dreamed boldly, and trusted their powers of resilience to see them through the inevitable disappointments.’

On my smartphone I have an app – a little programme called Wunderlist – to organise my life and keep track (sort of) of all my many and varied to-dos. It works… up to a point. Last night I checked and there were 397 items on the to-do list by the time I went to bed! But the reason I mention this now is that one of the sub-categories on my to-do list is headed ‘Dreams and Wishes’. As well as keeping lists of all the jobs I’ve got to do around the house, and at church, and for my studies and the like, I keep a list of dreams. Some of them bold. To qualify for the dreams list they need to be things I imagine would make life better but which seem a little bit implausible, over-ambitious, or otherwise out of reach right now. Some of the more modest ones (which I’m prepared to talk about in public) include learning to play piano, riding a bike round a cyclopark, finding a ballroom dance partner and performing on stage again, writing a hymn. Acknowledging these dreams, naming them, and writing them down seems to bring them one step closer to making them reality… even if it’s just by preventing me from forgetting, keeping the dreams safe and ready for the moment when the stars align and I can take action.

On your hymn-sheet, you may have noticed, I’ve printed some little dream bubbles. I’m hoping they will encourage you to write down some of your dreams as well. I invite you to take some time to write something in each one of those little bubbles to acknowledge a dream you have. Think of the definition from Rabbi Harold Kushner: ‘to dream is to imagine a world and a life better than the one we know now’. Imagine your life, or the lives of your family and friends, your community, the world, just a little bit better than it is now, in some concrete way that you can name and note down. If dreaming boldly seems a bit of a stretch this morning, you’re allowed to dream modestly, or even tentatively. If you need to take a bit of a run-up before you dream boldly, that’s alright! But try to make sure your sense of what’s possible, what you’re even allowed to dream, hasn’t been unduly constrained by social and political norms, or other people’s lack of imagination. And perhaps you might like to share one or two of your dreams in conversation over tea later.

In the meantime I’d like to close with a blessing by Jean M. Olson (slightly adapted). It’s one we’ve heard here before, and not so long ago, but just right for today I think; just right for those who dream boldly and are sometimes disappointed, yet who are brave, and resilient, and dare to dream again. She says:

May you be brave enough to share
your aching woundedness
and reveal your vulnerability.

May you speak your deepest truths,
knowing that they will change as you do.

May you sing the music within you,
composing your own melody,
playing your song with all your heart.

May you draw, paint, dance, sculpt and sew,
showing the world your vision.

May you write letters, poetry, biography,
slogans, graffiti, the great novel,
laying bare your words to love and hate.

May you love even though your heart
breaks again and again.

And until the end of your days,
may your life be filled
with possibilities and courage.

May it be so, for the greater good of all. Amen.