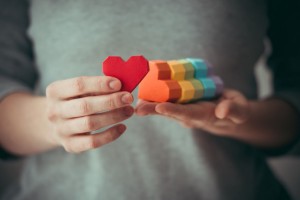 Here at Essex Church, since the start of the year, we’ve chosen a different theme to focus on each month. For July, the theme is ‘Identity’, and I put my hand up to lead this service, initially thinking about sexual identity and gender identity in particular. This is partly a nod to next week’s Pride march taking place here in London next Saturday – where a bunch of Unitarians will be joining the march to proclaim our inclusive welcome – and partly looking back to the ‘Working on our Welcome’ training day a few weeks back, which focused on ways in which we Unitarians could be ever more hospitable to people who identify as LGBTQIA (and beyond) – that is, to spell it out – people who identify as lesbian, gay, bisexual, transgender, queer, intersex, asexual, and so on. The list of letters has steadily grown in length over the years as the rainbow umbrella has kept expanding to include identities that aren’t so prominent, or even visible, indeed some of these identities might be ones you aren’t all that familiar with even now, and I know some people aren’t at all sure about the need for all these extra labels and letters. In today’s service I want to put the case that this proliferation of labels is a really GOOD thing – though if you’re unfamiliar with the terminology I can see it might seem a bit confusing [and – as an aside, though this is a genuine offer – if there’s anybody who didn’t make it to the workshop the other week and who would like a set of all our handouts getting you up to speed on current terminology on LGBTQ identities and ways to be a better ally let me know and I will make sure I get a full set of handouts to you.]