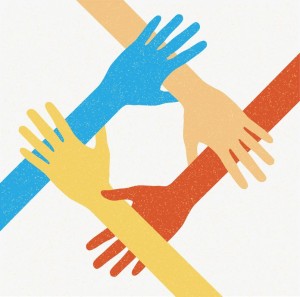 Sometimes people seem to think of Unitarianism as a kind-of ‘anything goes’ religion – but that really isn’t the case – there are definitely behaviours and even beliefs that are not-OK. To state it more positively, there is something at the centre which gathers us together in community, some common religious cause, even if we sometimes struggle to say what it is. Our Unitarianism is based around certain core values and principles which lead us to conduct ourselves – and to organise our communities – in certain ways. But it’s probably fair to say that we Unitarians are not always as clear as we might be in articulating our purpose, aspirations and expectations of each other.

As today’s service is all about ‘Relating in Community’ I thought we might do well to look at one possible way to address the challenges of relating to each other in a diverse community. Quite a number of Unitarian congregations, both here in the UK and around the world (especially in the United States) have composed their own congregational covenants. A covenant is a promise, a pledge, a commitment between members of the congregation. And congregational covenants can take a variety of forms. A covenant can be quite a short, poetic statement, designed to be spoken in unison, repeated often, and even memorised. Alternatively it can be a longer statement, more like a charter, which you might pin up on the wall. Importantly, it would be worked out collaboratively, with the input of community members. And although you would hope such a covenant would stand the test of time, they are generally open to revisiting and revising, so as to remain ‘alive’ rather than becoming ossified relics.

The Unitarian Universalist Association have an adult RE programme called ‘Faith Like a River’, written by Alison Cornish and Jackie Clement, which includes a covenant-creation-workshop. And in this programme they explain why covenant is hugely important in a non-creedal faith. They say: ‘The free church tradition of which we are a part does not offer up a creed, a certain set of beliefs, that everyone must accept in order to belong to the community. Instead, the boundaries of our community are determined by commitment and participation. Our central question is not “What do we believe?” but rather “What values will we uphold and how will we do this together?” Our covenant, the promises we make to each other in regarding how we will be a community of faith, is at the heart of what it means to be Unitarian.’

So a covenant is very definitely NOT a creed! It’s not about what we believe theologically. The UU minister Victoria Safford says a covenant should respond to a question more like: ‘To what larger love, to what people, principles, values, and dreams shall we be committed?’ The focus is on how we are with each other, how we behave, what we aspire to, and what our shared purpose is as a congregation. It’s not a trivial task to put this into words!

But congregational covenants can really help us, in a variety of ways, to relate in community. They can be helpful to newcomers, giving them a clearer sense of what they’re coming into, rather than leaving them to suss out the congregation’s values and norms by themselves. Covenants can add focus to the church’s activities and mission, and taking time to articulate a collective vision might help enthuse more people to get stuck in to the church’s work, and to feel part of a team pulling together on something bigger than any one could achieve alone.

Importantly, covenants can help provide a sense of continuity in times of change, something that I’d say is especially relevant to a congregation such as ours in the heart of London where the population is quite transient and we see a lot of people come and go from the church each year. And covenants can help to support congregations through times of challenge and conflict. They can set clear limits, boundaries, to acceptable behaviour which we pledge to abide by and which we can come back and refer to if things seem to be going awry in any way. It is really helpful if the congregation can compose their covenant when times are good, so that is well-established, and everyone feels ownership of it, ready for when it’s needed most.

You might find it hard to imagine quite what a covenant looks, or sounds, like if you’ve not encountered one before, so I thought I’d read you someone else’s, as an example. This is a short covenant in a poetic style from Cross Street Chapel in Manchester, which everybody speaks together in their service every Sunday as part of the prayers:

‘We gather here in sacred fellowship, to witness the fullness of our lives and all life;
To hold and be held, tell stories and listen, to be renewed and renew the world.
We speak with care and patience, we act with gentleness and compassion,
We forgive each other and ourselves. In faith that we build beloved community,
We renew our covenant today.’

Or here’s another one which was composed by the Unitarians of St. Mark’s Edinburgh:
‘We commit to help and care for each other and to contribute
to the spiritual and practical well-being of this our beloved community.
We aspire to be open to learning, to be open to new ways of connecting with
each other and with Ultimate Reality and to be sensitive to the needs of our fellows.
We aspire to speak our own truth and to be tolerant when that
spoken by our fellows does not correspond with our own.
We commit to reach out in love to the wider world and
to share what we have found here with others.
Recognising that we each have different skills we commit to
give as we are able and to receive the gifts of others.
We aspire to bring enthusiasm, joy and humour to all that we do together.’

There’s a lot more to say about covenanting than we have time for today but I wonder if this is something we might explore further as a congregation in the future. On the back of the cream slip in your order of service I’ve put a few questions and prompts to try and gather your first thoughts: If we were to have a congregational covenant, what might you want to see included in it?

Consider the questions – What is our purpose as a congregation? What do we gather here for? Why do we come together? What do we aspire to as a community? How do we hope to embody our values in the world? How do we want to be with each other? What attitudes and behaviours could we all commit to?

Perhaps you could jot some notes down under those headings and bring your responses through to the hall when it’s time for coffee after the service. We’ll blu-tack them up. And after today’s AGM we’ll collect them in and ponder what our next steps might be.

For the time being, the closest thing we have to a covenant is the ‘Statement of Commitment’, on the back of that same cream-coloured slip of paper. These are words which we speak every year in the service on the day of the church AGM. They look very official, as if they’ve been around forever, but in truth were written ‘on the back of an envelope’ thirteen years ago. There’s hardly anyone left who will remember it being written but just a few committee members and Sarah sat around a table at coffee time in early 2006, a week or so before we were due to hold a ‘Service of Welcome and Commitment’ to install Sarah as minister. The words were written in haste and without much consultation but people seemed to like them enough that we still say them once a year (even if we don’t think about them much between times).Perhaps it’s time for us to think again about composing an ‘official’ congregational covenant! But in the meantime, I invite members and friends to stand as you are able, to speak these words together and re-commit ourselves to the work of this community known as Kensington Unitarians.

Let us Affirm Our Statement of Commitment:

It is with pleasure and love that we commit
ourselves to this shared ministry.

With caring and open hearts we pledge to join in
making our community an inclusive and
welcoming place for all people of goodwill.

We shall continue to uphold our liberal religious
tradition and to encourage the many spiritual
seekers who meet in our church building.

We trust the power of honest communication,
creativity, and kindness, to heal and hold us always.