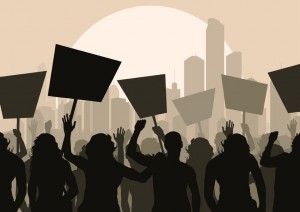 Sometimes – quite often, if I’m honest – I feel a sense of despair about the state of the world. If we look at the big picture of world events then there often seem to be plenty of reasons to feel like we’re a bit beyond hope as a species… collectively incapable of making wise choices… and we might well take the rest of the planet down with us in a catastrophic blow-out when we go.

In many ways, here in Britain, over the course of my lifetime at least, we have been largely shielded from the very worst of the chaos. At the moment, there is not war playing out on our doorsteps, and the effects of climate change are as yet not sweeping our homes away, not here in London anyway… but political upheaval is having an impact, ever closer to home, or so it seems to me. Policies which serve to concentrate wealth in the hands of the few are ever-more-the-norm and those basic rights which had seemed sacrosanct for so long in this country – the welfare state, free education, social housing, the NHS – are being whittled away, one by one.  The gulf between the haves and have-nots seems to get greater by the year and there is a scary tendency to scapegoat those in genuine need as ‘scroungers’ to justify the starvation of funds to vital public services and to stir up disregard for the common good.

Those of us who stand up to preach are generally discouraged from talking about politics. In general it’s quite a sensible policy. In this room there is undoubtedly a spectrum of opinion (though perhaps we might say there tends to be a general leaning on those issues I’ve just mentioned…). It is quite understandable that we feel squeamish about prodding at potentially divisive issues… but, I would say, squaring up to injustice is a central, essential, aspect of being religious, in any meaningful sense. It’s a significant historical strand of all the major faith traditions. If we think back to the heroes and heroines of the past, they were often awkward so-and-sos. They saw injustice in their time, and spoke prophetically of it, and made a nuisance of themselves. As we heard in the reading from John Cobb earlier, in times like these, ‘we are called to resist’.

“Make no mistake about it: Christianity is resistance, its character indelibly marked by opposition to political powers that undermine the biblical values of peace and liberation. Christianity is also resistance to economic powers that show contempt for the justice of God… The prophets focused their sights on the evils of economic injustice… they directed rage-filled words against the unjust accumulation of land and wealth… [to be direct,] Christianity is resistance to economic forces that create cycles of poverty which leave people without access to the material goods they need to survive and flourish.”

Those words from Michael G. Long are framed for a mainstream Christian audience, but our Unitarian tradition stems from the same heritage and we share those values, don’t we? We would want to stand for justice, peace, liberation. What might that look like in practice, today? There are, of course, of all sorts of approaches we can take to resisting injustice. I’m going to highlight three broad strands where we might focus our efforts. For short, I’ll call them ‘truth-seeking’, ‘bridge-building’, and ‘embodying an alternative’.

1. Truth-Seeking: You can think of this in a number of different ways. An inner truth-seeking, an outer truth-seeking, and a cosmic truth-seeking, for starters, though they’re all connected. There’s something to be said for attending to our own inner reality, working on our own ‘stuff’, our own values and virtues, and really knowing ourselves in all our varied shades. This sort of honest self-knowledge is the foundation of understanding and compassion for others which, I would say, is the foundation for seeking justice, peace, and liberation for all. And there’s a lot to be said for seeking the bigger truths, the meaning and purpose, at a cosmic level, which is probably what a lot of us are doing here on a Sunday morning. But at more mundane level, thinking about the state of the world and our current political situation, truth-seeking might just amount to critical thinking, taking nothing at face value, being aware of the vested interests and distortion that are widespread in the mass media. Both the recent EU referendum campaigning and, in the states, Donald Trump’s presidential bid may be said to characterise ‘post-truth-politics’. Mischief, propaganda, and outright lies abound and there seem to be no consequences for those who peddle such rot. But, in the end, there will be grim consequences for all of us – individuals and communities – who are taken in by it. So one major strand of resistance is what I’d call ‘truth-seeking’ in its many and varied forms.

2. Bridge-Building: Each of us needs to cultivate relationships with people who are not like us. Try to mix with people of different backgrounds, different ages, different life experiences, and – this is the one that I find most challenging – different political viewpoints. It’ll do us all good. Speak your truth, and listen to theirs, with an aim of mutual understanding. It’s not easy. I’m not especially talking about going to interfaith meetings or joining neighbourhood committees (though both those things are laudable). I’m mainly talking about making personal connections. There’s a bit of a tendency – especially for those of us who use social media – to end up in echo-chambers where we are surrounded by people like us who hold more-or-less similar opinions. If we think we’ve got some truths to share then we need to reach out beyond our own cliques. Speaking up and challenging other people’s (friends’) opinions about issues that are important… that’s hard but necessary work. It’s so tempting just to keep our mouths shut for a quiet life. And undoubtedly we’ve got stuff to learn from people whose lives are significantly different.

3. Embodying an Alternative: As John Cobb said: ‘we hold up the picture of an alternative… it is important that people know that the self-destructive world in which we now live is not the only possible one. Together with [others who share these values] we must proclaim that ‘another world is possible’ and then make this possibility visible.’ And I say that involves speaking up for those values and living by them for all to see. Doing our best, as the flawed and fabulous humans that we are, as the peculiar and promising community that we are, to embody those ideals of justice, peace, liberation. There is some great work being done by religious progressives in the states on this front. You may have heard about the ‘Moral Mondays’ protests which started in North Carolina. A broad coalition of religious voices have joined together to stand up against injustice. Their stated aim is to ‘redefine morality in American politics and challenge leaders of faith and moral courage to be more vocally opposed to harmful policies that disproportionately impact the poor, people who are ill, children, immigrants, communities of colour, and religious minorities… [and to] rise above hatred, fear, and left / right politics, in order to reach the highest values of love and justice.’ They also affirm rights for lesbian, gay, bisexual and transgender people and they also speak up for reproductive health rights. I imagine it was no mean feat pulling together something that they could all sign up to. Wouldn’t it be amazing if progressive religious types over here could do something like that? I’d love to be part of such a thing – speaking prophetically against injustice in all its forms from a progressive religious standpoint instead of being timid – it’s what we are called to do. Sometimes people argue that religious groups should stay out of politics and remain neutral but I recall the words of the historian and activist Howard Zinn who said:

‘It is impossible to be neutral. In a world already moving in certain directions, where wealth and power are already distributed in certain ways, neutrality means accepting the way things are now. It is a world of clashing interests – war against peace, nationalism against internationalism, equality against greed, and democracy against elitism – and it seems to me both impossible and undesirable to be neutral in those conflicts.’

On all of these fronts, there’s a limit to what any one person – or small community – can do. And it’s easy to feel personally or collectively overwhelmed (especially in moments of crisis). There’s a balance to be struck. Each one of us will need to step back from time-to-time. The world needs each one of us to do what we can – and not to disengage altogether – but at the same time we need to practice self-care if not self-preservation. It’s a balancing act. Even if our circles of influence – those people, communities, and causes we can have a noticeable influence on – are much smaller than our circles of concern – there is nearly always something positive and outward-looking we can do. There are some well-known words from Edward Everett Hale, a 19th century Unitarian minister, which come to mind:

So let us do whatever we can to resist injustice in all its forms – to seek truth, build bridges, and embody an alternative way of living – standing up for justice, peace, liberation, and showing loving-kindness to the world.

I want to end with some words of encouragement from Howard Zinn:

“To be hopeful in bad times is not just foolishly romantic. It is based on the fact that human history is a history not only of cruelty, but also of compassion, sacrifice, courage, kindness. What we choose to emphasize in this complex history will determine our lives. If we see only the worst, it destroys our capacity to do something. If we remember those times and places—and there are so many—where people have behaved magnificently, this gives us the energy to act, and at least the possibility of sending this spinning top of a world in a different direction. And if we do act, in however small a way, we don’t have to wait for some grand utopian future. The future is an infinite succession of presents, and to live now as we think human beings should live, in defiance of all that is bad around us, is itself a marvellous victory.”