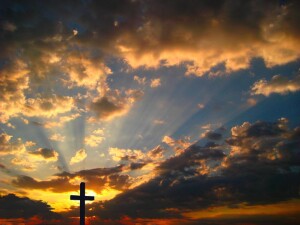 I invite you to imagine, as best you can, what it might have been like to be a follower of Jesus, one of his inner circle, in the week or so that led up to his death. Being a disciple was a big ask. You’d probably have had to make some serious sacrifices to commit yourself to following him. I can’t help thinking of the hymn we used to sing at my Catholic secondary school: ‘Follow me, follow me, leave your home and family, leave your fishing nets and boats along the shore…’

Something about this itinerant teacher Jesus – his presence, his message, perhaps the promise of something more he seemed to offer – his teachings about the ‘Kingdom of God’, a realm of love and justice that is ‘close at hand’ – this vision drew people to drop everything and follow. A few people, anyway, and as they joined him on the road a kind-of momentum gathered. During the time of Roman rule, when people were under the thumb of Empire, many were crying out for liberation of some sort or another. For hope of a better life than the one they had. And Jesus caught people’s imagination. By Palm Sunday, you’ve got to say, it was looking good. Jesus and his followers entered into Jerusalem – the seat of power – to a rapturous reception. But the hubbub around Jesus didn’t go unnoticed by the authorities. It was a threat to order; a disturbance that might challenge the status quo. Within days Jesus had gone to the temple and chased out the money changers. And the powers-that-be couldn’t let this go unpunished. Jesus was arrested, paraded through the streets, humiliated, and brutally executed by the state.

Imagine being one of Jesus’ followers – someone in his inner circle – as this horror story went down. The crucifixion was meant to put the frighteners on you. So most of his supporters scattered, and went to ground, in fear of the consequences of being associated with him, probably in fear of their own lives – of course they did – most of us would likely have done the same. Just a few stayed to the bitter end and saw him tortured and killed in the most horrific way.

If you were a follower of Jesus that day – his death must have felt like the end of the world. A crushing blow. You’d given up everything to follow him and the hope that he represented. And now he was dead – hope was dead – the future you’d dared to dream of was swept away. Reality, in that moment, must have been unbearable. It was a catastrophe; the end of everything.

The power of the Easter story is, for me, in the way in which it speaks to those moments of devastation in our own lives, and how it speaks to the collective suffering of the human condition. You know that saying ‘we each have our own cross to bear’? Every life has these moments –often not just fleeting moments but long, hard seasons – of suffering, hardship, devastation. OK – most of us are not literally headed for crucifixion – but life seems to have an endless variety of ways to bring us suffering and torment, physical or emotional, at varying degrees of severity. And there’s probably not much to be gained from comparing one person’s suffering with another anyway. When you’re in the midst of pain – when it feels like the end of the world – that is reality for you.

Maybe each of us has a different threshold for what counts as a catastrophe – some of us are more stoic than others – but I doubt many of us have made it this far through life without having some experience of facing an unbearable reality, and losing sight of all hope, at least for a time. ‘End-of-the-world’ moments in my own life include the sudden death of a loved one, 13 years ago, and the loss that came with it of the imagined future that I’d hoped we’d have together; or, on a less personal front, waking up to news that an election had not gone the way I wanted, and feeling a real sense of devastation that we’d lost a chance to collectively choose a path of greater justice and equality; or, one which I guess most of us can relate to, the moment last March when the full implications of the pandemic really started to sink in, that realisation that life-as-we-knew-it would be put on hold for a long, long time (and indeed that things might never be quite the same again). Each of these events, to different degrees of intensity, led to a period of grief and disorientation.

As I shared those personal examples, memories of your own might have come to mind too – ‘end-of-the-world’ moments in your own life, or in the lives of your loved ones – perhaps you’ve known breakdowns in mental or physical health, traumatic relationship break-ups, losses of job or home. So many sources of suffering in the run of our everyday lives. No life is untouched by sorrow.

But what happens after the end of the world? When the worst thing imaginable has happened, and then we wake up the next morning anyway, whether we especially want to or not. We’re still here. In an unbearable reality we would never have chosen but which – somehow – we still have to live in.

In the immediate aftermath, it might come down to emotional first-aid, self-care, community-care. You might have to spend days, or weeks, or months, just doing whatever it takes to get by. You might need to hunker down, take to your bed, or use every self-soothing technique in the book. You might need to lean heavily on friends and family or wider systems of social support.

Let’s return to the Easter story, though, to see what else we might learn from it, for our darkest times. Because Jesus’ disciples do wake up the next morning, after this end-of-the-world moment of his crucifixion, in a state of utter brokenness. They’re still here, even if he’s gone, and they are faced with the despairing question: ‘what now?’

For Mary Magdalene, the worst thing imaginable has happened, the death of her beloved teacher. So what does she do? Well, first, she hunkers down – she waits in darkness – as she observes the Sabbath. And then, she does what needs to be done. Just puts one foot in front of the other. She sets out to perform the necessary burial rites. There’s still work to be done in the name of love. She shows up for Jesus, devoted to him even in death, even after all hope is – apparently – lost. But when Mary gets to the tomb, she finds the stone has been rolled away, and his body is gone. This is one more blow – just when she thought it couldn’t get any worse – one final indignity. But as Kathleen McTigue says: ‘Mary stayed, alone and weeping; maybe something defiant crept in with her grief that made her brave enough to stay.’ Mary is very much Still Here. Or to use Anna Blaedel’s term – Mary remains – fully present to reality in all its pain and sorrow. Then someone calls her name. And in that moment she recognises that Jesus is Still Here too. You don’t have to believe that Jesus was resurrected in body, temporarily reanimated after his death, to believe that something of him lived on beyond his brief 30-odd years on Earth.

In the act of waiting, attending, remaining – bearing witness to the grim reality of the situation – a new vision came to Mary. The light, the love, the hope, that Jesus brought to his disciples, lived on. And that light, that love, that hope – so fragile and faltering in that moment – could be passed on. Mary ran to the other disciples and told them what she had seen. And – slowly – they caught on. After Jesus’ death – ‘the end of the world’ – they were still here. So they took whatever tiny bit of light and love and hope they could muster – and they did all they could to nurture it in the world. In the weeks, months, and years that followed (read the book of Acts if you want to know more) the disciples spread out – in the hostile environment of the Roman Empire – and spread the word. They spoke of the ‘Kingdom of God’ – the realm of love and justice – that was still ‘at hand’, despite everything, despite the crushing blow they had suffered, despite ‘the end of the world’. They held fast to that vision of light and love and hope – that possibility of a world transfigured – which slowly spread across the globe, and down the generations, evolving as it went, and taking on different emphasis as it branched into different traditions – including our own Unitarian way.

Perhaps the Easter story – not so much the story of Jesus’ resurrection – but the story of how Mary Magdalene and the disciples found a tiny seed of light and love and hope in their darkest hour – and how they nurtured that tiny seed even in the most inauspicious and hostile conditions – maybe that’s the example we need to look to, when the worst happens in our own lives. We hunker down for a bit, we wait in darkness, we really bear witness to the awful reality. Then we wake up again the next morning, and find ourselves still here, and ask ‘what now?’ Are there seeds of light, and love, and hope we can still find, and nurture – no matter how tiny? Are we being called to share these seeds with others? Is there work that’s uniquely ours to do? As Kathleen McTigue said: ‘The unfolding story of our time on earth is clouded with pain and cruelty, with missed opportunities, unthinkable heedlessness, and indifference. It is also marked by the bright notes of decency, kindness, freedom, and courage. Easter proclaims that we each have a part to play in how the story unfolds, if we are willing to wake up.’

Easter, understood this way, doesn’t offer us an extravagant kind of hope. It’s pretty modest, quite humble, compared with most interpretations of the story. But – for me – it feels more real. Within reach. And after the year we’ve had it’d feel all wrong to be exuberantly optimistic. So I’m going to conclude with an echo of the words from M Barclay that opened our service this morning:

‘Keep your proclamations of grandeur. Give me an easter as small as a seed.
One that can be planted while it’s still cold outside. One that can be
watered with tears, and demands time and patience to grow…
Spare me the cosmic promises of other-worldly escape
and point me to the Sacred possibilities within reach.
Tell me again about how the nutrients born from decay
keep even the saddest places brimming with potential for life.’

May we each discover, and nurture, those tiny seeds of Easter hope in our own lives. Amen.

A video recording of this sermon is available: